The Secret Garden of the French Revolution

(*Note: This is a paper for an art history class in it's entirety. The figures are displayed throughout because this is a blog.  Most college research papers require a specific citation style.  References cited appear as the author's last name and page number of their work in parenthesis.  These are listed in their entirety at the end.) 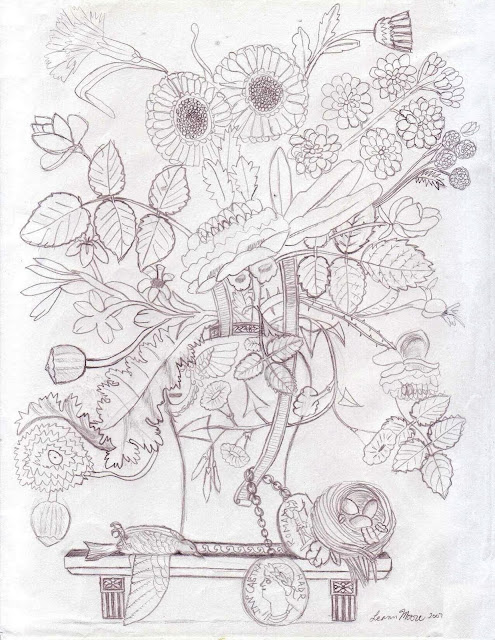 The Secret Garden of the French Revolution
My journey through The Getty Center of Los Angeles on April 4, 2007 came to a pleasantly abrupt halt when I encountered Carved Relief (fig. 1) by Aubert-Henri-Joseph Parent (1753-1835) .  It was created in Paris, France in 1791 from a single panel of lindenwood (Tilia sp.), also called lime wood.  It is unassumingly titled Carved Relief in the museum among the other decorative arts, but is listed elsewhere as Allegory of the Constitution of 1791 (Streeter 53).  I was drawn to its simplicity and naturalism.  In fact, as I stood sketching and admiring the work, many people stopped to look or take a picture and I shared out loud to someone that if you added water it would spring to life.
It is strikingly similar to Parent’s 1789 Carved Relief (fig. 2), also listed as Allegory of Mortality (Streeter 53), which is located but not currently on display at The Getty Villa (“Carved”-1789).  During my research, I found only one published source of information on Parent’s work and life due to his relative obscurity.  I feel that referring to some of his earlier work is a necessary part of the story of this one piece of art.
My interpretation of the 1791 Carved Relief (and other works) led me to postulate that he was likely influenced by the well known British lime wood carver Grinling Gibbons (1648-1721) as well as the Dutch still life painters and the Neoclassical movement.  Parent’s 1791 panel could be considered a still life carving, although I did not find much cross-over between the painters and wood carvers of 18th century France (or from anywhere else for that matter).  During that time period, however, the Royal Academy had established a rigid hierarchy which focused most of its attention on history painting and relegated genre, still life, landscape, and portraiture to a second-class status.  Unlike the history painters, the training of these subjects was less controlled and artists were able to experiment with new themes as well as media (Eliel 47).  There is no mention of Parent attending the Academy, or how he learned his craft, however he did participate in the Salon exhibitions of Paris like most artists of his day and was probably influenced by this trend. 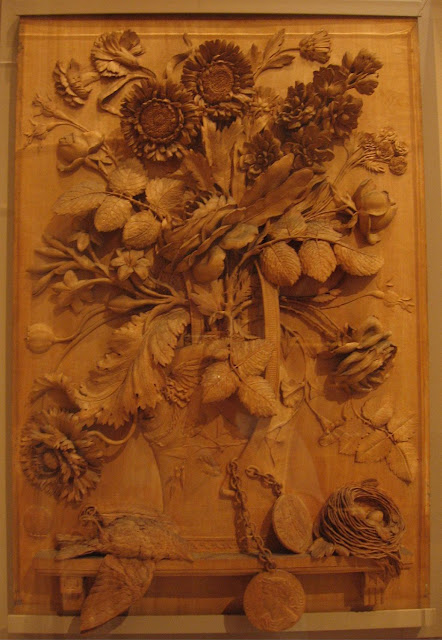 (Above)1791 Carved Relief Panel, Getty Center.
Parent created a multi-level and deeply undercut relief with different linear and textural qualities to each level.  Undercut refers to carving that is worked from one solid piece of wood where the relief is so deep it is almost free from its background.  This technique gives the carving an aesthetic quality that is often missing from built up work that uses several pieces of wood with glue or pegs (Bridgewater 90).
Lime wood is popular for carving because of its pale color, hardness, and inconspicuous grain size (Bridgewater 24). It is also reasonably stable over time if kept dry. But the functional appeal of the wood is that it can be easily carved in any direction and its lack of character allows the artist to dominate it completely (Bridgewater 85), like a painter with a blank canvas.
Some of the wood contours are visible in Parent’s relief, but they are smooth and uniform and do not detract from the content.  The marks of a gouge or chisel are hard to detect, except where they lend to the texture of the forms they represent. The shelf retains enough of a woody quality after carving that one does not suspect it was intended to represent a different material like the smooth and shapely vase does.  The soft curving lines of the vase give it a polished look as if it were modeled after glazed ceramic, in contrast with the flatness of the background and the sculptural quality of the plants, animals and medallions.  Each flower and leaf type has a different carved texture and individuals within a species do not look identical, mimicking the diversity found in nature.
Parent’s gradations of relief create natural light and shadow, similar to the color values of painting (Streeter 57), most noticeable among the high relief of the roses and deeply undercut poppy leaf running diagonally at the upper left shoulder of the vase.  This contrasts sharply with the low relief of the vase itself and the bindweed vine flowing across it. 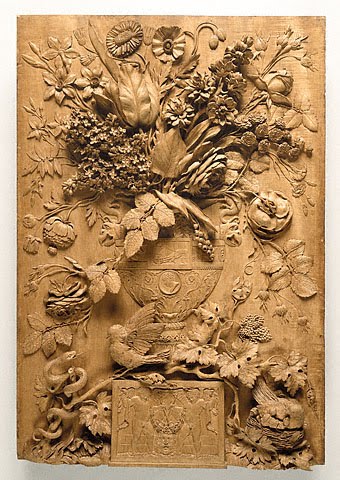 (Above) 1789 Carved Relief Panel, The Getty website
It is clear in both the 1789 and 1791 panels that Parent was influenced by the Dutch still life painters of the seventeenth and eighteenth centuries.  Streeter describes the similarities of these compositions “in which a strong pyramidal central structure balances a diagonal with broad masses, offset by the radiating sprays of finer textures.”  He also points out the inherent theme of contrasting “a rich and enduring man-made object with the bounty of nature” (57) which is present in both panels as well as most still life paintings.
Parent’s work is also reminiscent of Grinling Gibbons who was known for his decorative wall borders and panels that often depicted flowers, birds and other natural motifs.  Two of Gibbons well known relief panels are located in Italy, where Parent traveled from 1784 to 1788 (Streeter 63).  He visited Florence where Gibbons’ Cosimo Panel (a gift from Charles II to Cosimo III de’ Medici in 1682) was located (Esterly 132). Although there is no direct evidence that Parent saw it firsthand, the similarities between the Cosimo Panel and Parent’s 1791 Carved Relief are hard to ignore.  Both panels are laden with images of nature and highly symbolic of their own political atmosphere, with a carved figure on a medallion hanging from a chain (in Parent’s case, there are two of them).  Both panels also symbolically join two groups of people together in the hope for a peaceful union.  They mostly differ in construction.  Gibbons’ panel is built up from several pieces and glued together allowing for a more intricate composition of elements, while Parent’s is carved entirely from a single piece of wood and often reaches the same level of detail and realism.
Most wood carvers concentrated on producing wood furniture during the eighteenth and nineteenth centuries (Bridgewater 89).  It seems peculiar that Parent chose to carve decorative wood panels that did not have any utilitarian purpose in an age when the decorative arts (mostly furniture) flourished and according to Bridgewater, plaster began to replace wood for the purely decorative interior design elements (89).  The frivolous Rococo style of the aristocratic class was already being replaced by the ideas of the Enlightenment when Parent carved his first relief panel in 1777, but it seems that whatever his actual social standing was by birth, he had a strong  personal connection with the Monarchy and upper classes. 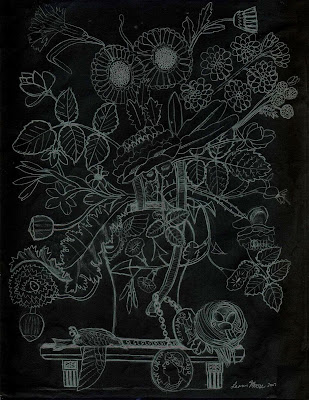 In order to understand the 1791 panel, one needs to look further back into Parent’s history as well as the cultural context of the time period.  Parent drew a fairly prestigious clientele in his day.  He claimed to be descended from a secretary of state to Louis XI (Streeter 60) and perhaps his aristocratic ancestry had something to do with his close ties to the court of Louis XVI.  In 1777, a similarly carved wood relief by Parent was presented to the young king who subsequently displayed it in the inner dining room at Versailles (Streeter 61).  A carved inscription on the frame bears an extremely patriotic tribute to the king, “…when I raise a trophy to the rarest of virtues, my art traces Louis and recalls Titus” (Streeter 61).  With no specific patron mentioned for the panel, I am inclined to think this somewhat reflected Parent’s personal feelings toward his king and country.
In this light, the symbolism of his 1789 and 1791 carved relief panels make more sense.  The 1789 Carved Relief  coincided with the French Revolution.  Near the bottom of the panel, a pair of birds defend their nest from a grass snake and a slug.  This allegory of parental responsibility represents the French monarchy’s duty to its subjects at the start of the Revolution (“Carved”-1789).
Two years later, the National Assembly was drafting a constitution for France and on September fourteenth, Louis XVI took an oath to support it.  Parent’s 1791 Carved Relief captures “this moment of balance when the Monarchiens still hoped that a reformed and constitutional France could be governed by the decrees of the French senate, linked by the new constitution to an enlightened King Louis XVI, like a new Hadrian” (Streeter 59).  In this panel, Parent chose to symbolize these two linked entities as two medallions linked together by a chain.  One medallion has a bust of the Roman emperor Hadrian and the other a representation of the Roman senate, clearly showing the influence that Neoclassicism had on Parent’s work.
It is interesting to note that Streeter’s interpretation (above) published in The Getty Journal implies a moment of hope, while the Getty Museum website explains “the dead bird (the old regime) and the unguarded nest (France)” as symbolizing “the failure of the new constitution and the end of the monarchy” (“Carved”-1791).  I do not see how the two interpretations can coexist unless the medallions actually represent the hope that Parent and his countrymen had but was not to be a reality. One of the first things I noticed about the 1791 Carved Relief  was the realism and naturalism of the flowers and leaves.  They include scabious or “pincushion” (Scabiosa sp.), tuberose (Polianthus tuberosa), carnations (Dianthus sp.), English daisies (Bellis perennis), buttercup (Ranunculus sp.), roses (Rosa sp.), double poppies (Papaver sp.), bindweed (Convolvulus sp.), and jasmine (Jasminum sp.) (Streeter 57; Hortiplex; The PLANTS).  Considering the symbolism of the work, it is interesting that all of these are perennial plants (they do not complete their full life cycle in one year but continue to bloom year after year).  Was this part of the hope that Parent had for the future of his country?  The flowers may recede into a dormant state in the winter, but they will appear again in full bloom the following year.
His choice of medium is also significant I think, because unpainted wood is so “natural” that anything carved out of it takes on that connotation.  The political symbolism of the medallions might have seemed pretentious if they were gilded or painted.  Parent may have been implying that the King and the National Assembly working together was as natural as blooming flowers or that even the death of a bird leaving behind its defenseless nest of eggs is sometimes inevitable.
The tone of the 1791 Carved Relief is somber, yet peaceful.  It is currently displayed in a clear glass case so as not to detract from its stark natural appearance.  But hiding in a corner among vibrantly colored and gold gilded furniture, it could have been easily overlooked, just as Aubert Parent has been by the art history world.  Were I not in search of a secret garden hidden among the art gallery, I might not have found it.
Read more »
Posted by Leann at 1:07 AM No comments: Links to this post