Jane of All Coats 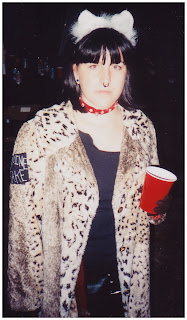 I just gave away my vintage faux leopard coat to an old friend. I hadn't even looked at it or thought about it in months, but when I got it out and inspected it and hung it up to air out, I admired it and thought, "what the hell am I doing? I'll never find another leopard coat this good". But, I had already promised it away and I didn't wear it anymore and it's the kind of special coat that deserves to be loved and worn and shown off and ogled over and talked about.

Its a really good coat. I bought it from an old lady at an antique swap meet while I was in college. I believe she was the original owner. She informed me that I needed brown gloves to go with it (which I also bought from her) and she told me about how "in her day" ladies didn't go out of the house without gloves and sometimes they would cut the tips off of their gloves so they could still use their fingers while wearing them.

Once while wearing it, someone taunted me about wearing fur, but I couldn't respond to the person because of the situation. I was irritated because not only was I absolutely against wearing fur but I was a vegan animal rights activist at the time. I was inspired to make a patch that said "genuine fake" and sew it on the arm. That's the history of the leopard coat.

I have noticed that as I think about this and some other coats I've worn, they all have memorable stories to go with them.

There was the blue velvet coat. It was royal blue velvet that was quilted and hung down to my ankles. It buttoned up the front and had two flap-over pockets and a simple short collar. It flared out a bit in the back and was lined with pink satin. I was probably just out of high school when my good friend Samantha told me about this amazing coat she saw at a vintage store. She described it and I fell in love with the idea of it before I even saw it. The thing is, although she wanted it too, it wasn't really her style. But it totally fit my goth/punk/wierdo look at the time. I ended up going to the store and buying it first. She was upset for about 5 minutes, but let it go. I don't know why I did that. Why I went out and bought this unique item that my best friend wanted. Was I a horrible selfish person? Was I just reacting to some innate shopping addict gene I got from my mom? Or was it destined to be mine - all I had to do was buy it first?

Over the years, the pink lining ripped in a few places and the pockets had to be reinforced with safety pins (because I've never been much of a seamstress) and finally, last year, I gave that one away to someone I know too.

I also remember this black velvet coat that my friend John wore just after high school. It was almost like a casual dress jacket and always smelled of vanilla. I used to steal that coat whenever I could and I think it became quite an object of manipulation at one point. It inspired me to wear vanilla scented perfumes, which I still do to this day.

This brings me to my current coat. It's a black fuzzy button up coat that goes above my knees, with a long wide collar, two pockets and a strap across the back. It's kind of like a pea coat meets a stuffed animal.

I got this one at a Naked Lady Party, which I need to explain because it's a lot less exciting than it probably sounds. It's basically a girly get together (food, wine, and chocolate, and clothes) where everyone brings a bag of old clothes they are getting rid of. The clothes are dumped in a central pile, and the girls draw numbers and choose clothes they want. Many try on the clothes there and then to see if they want to keep them, hence: "naked lady party".

I saw the girl who was getting rid of the coat. She was about six inches taller and 50 pounds lighter than me, but I tried it on anyway. Somehow, it fit really well - kind of like those traveling pants that got to star in a movie. So, it needed some love (the seams were coming apart and the pockets were full of holes) and for once I found it almost effortless to fix something with a needle and thread. I made new pockets out of an old bergundy velvet shirt and it came back together like new. This is the coat I still wear and love and feel comfortable and warm in.

Anyone have a coat story to share?
Posted by Leann at 8:23 PM

Coats----what a wonderful subject. I don't think many people really give much thought to how much their coats mean to them. I have often thought about, & relished some of the coats I've had, too. Just the other day I remembered a Jean jacket I had that was lined with black & red felt & insulation----it fit like a charm & was so cosy & warm. And as you described your long coat, I remebered my favorite coat in high school----it was calf length & blue, made out of a suede material with fake fur trim at the bottom--Oh how I loved it & I wore it till it was no more. It had a bazzilion snaps going up the front & had a fitted waist---when I think about it, I picture an old fashioned scene on an ice rink where the coat just comes down above the skates & hands being tucked away in a muff (one of those tubular hand warmers)----great memory.
And today, I have on a short little camel colored corduroy jacket---that, again, fits like a charm---the material has lycra added so it gives, as well as, fits. Man oh man, it's comfortable & for the praticle side of me---it goes with soooo many things.
Thanks for the wonderful onslaught of thoughts & memories. And may your old coat---find joy with its new owner.