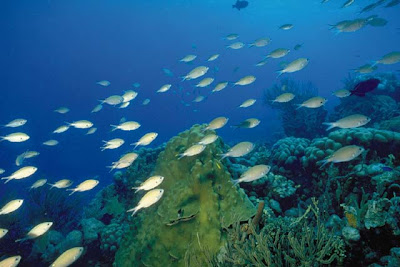 I used to create imaginary worlds when I was a kid. One fantasy world was hidden underground, accessible from drainage holes that led to lesser known passages. These portals did not enclose a subterranean city as much as provide instantaneous transportation to anywhere else on the planet. The precise details of what lay under the suburb I lived escape me now, but I do remember the underwater passageway.

One of the thousand unmarked gateways led to the ocean floor where a glass tunnel stretched to meet the water above your head. The semicircular glass tunnel covered an earth bottomed passage, wide enough for a freeway, from one shore to the next. The thickness of the glass increased with the depth of the ocean floor but the entire path allowed for visual contact with the ocean above.

I imagined this world when I was eleven years old, at a time when I desperately wanted a means of escape to a far off place. Why not crawl down a tunnel, hop into some kind of jet powered transit car and then walk under the whole ocean? I could go travel the whole world that way safely, and for free!

Not surprisingly, an underwater restaurant opened somewhere in the world not too long ago. I think seeing pictures of that restaurant reminded me of my youthful fantasy world. I told my friend how I came up with the concept for the restaurant 19 years ago and could have made a ton of money selling the idea first.

Another product I jokingly take credit for inventing in my head is TiVo, or the digital video recorder in general. When I was around the same age, eleven or twelve, I thought it would be great if I could pause and rewind the cable television the way I could with videos. This was before the digital revolution; compact discs might have just become available. I find it amazing that my imagination back then strove for digital solutions in the analog world.

To be honest, I didn’t think my idea would ever become a real reality. It was created from the same place as the glass tunnel under the ocean and the monster in my closet (which I never thought was real but was still afraid of).

I used to visit San Francisco regularly and the first time I took the subway from there to Berkeley I was stunned because the train actually goes under the San Francisco Bay. No glass tunnels to observe the wildlife as you go, but I did appreciate that it finally came into existence. It is things like this that remind me how limitless our world experience can be.